12 Most Colorful Parrot Species in the World

Most bird lovers want to adopt a colorful parrot that looks great in their houses. But just deciding what Parrot color you want is not the right approach you should take. Many times different parrot species have different temperaments.

Some require more attention than others. This is why in this guide, you would not only know to get to know the 12 most colorful parrot breeds. But also if they are good pets for you.

The Eclectus parrots are considered quite unusual because of their smaller tails Parrot. This parrot (male) looks similar to the most common green parrot bird at first sight.

But the blue tail and a hint of orange make it appear exotic. Meanwhile, the female Parrot looks completely different from its bright red body and purple plumage. 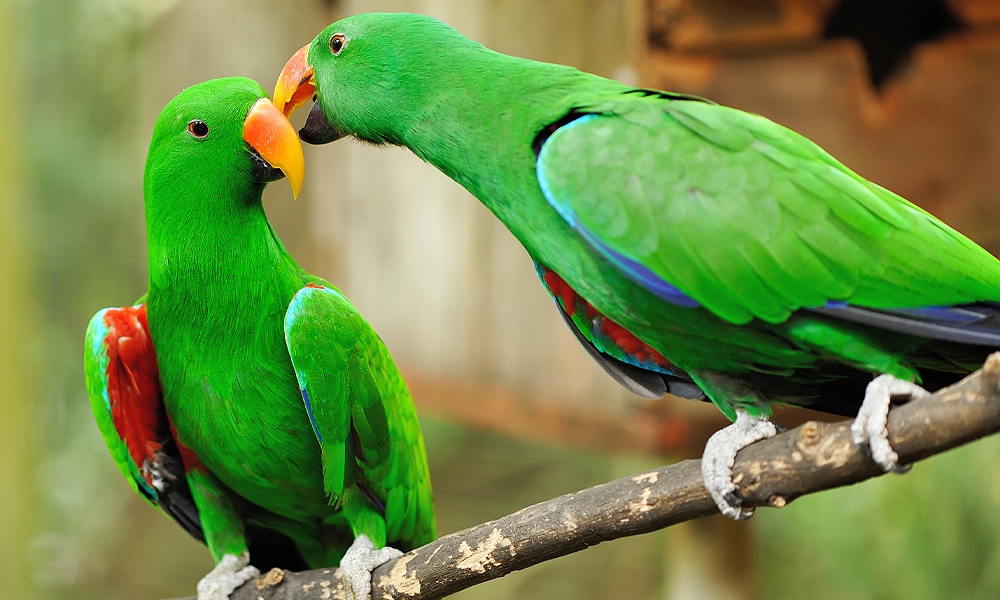 Eclectus is a bird native to Northeastern Australia, the Solomon Islands, Sumba, and the islands near these places. Is getting Eclectus a good idea? Well, yes.

Eclectus parrots are intelligent and have a peace-loving nature. They are good with children and are gentle. But do not constantly disturb Eclectus; they do not tolerate overwhelming activities.

The Hyacinth Macaw parrot has an entirely blue body and a long tail. Even though the beak is black, it might appear bluish in the photos. It also has a yellow circle around the eyes and near the lower beak. 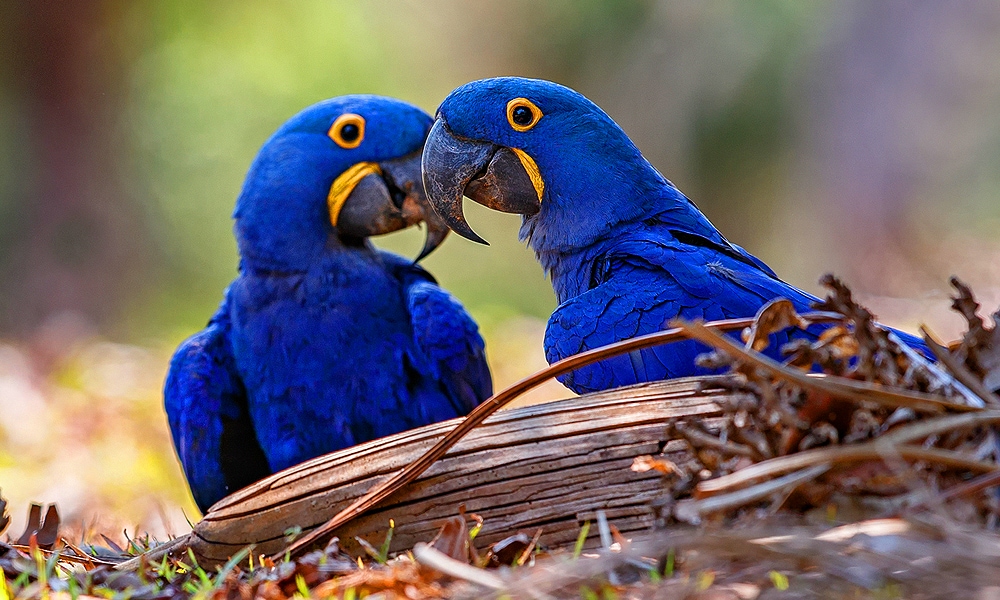 The Hyacinth Macaw parrot can be seen in central and eastern South America, but it is going extinct now. This specie is called “gentle giants” as well because they are good pets. But do not annoy them, it will not attack you but can act loud.

Sun Conure parrot is also known as Sun Parakeet in aviculture, is a rainbow in bird form. Their plumage is bright yellow, which gives the bird its name. The underside of the parrot has a bright orange color and the face is orange-flushed as well.

Both wings have golden and green feathers. Most of the tail is olive green, but it has blue and green around its border. 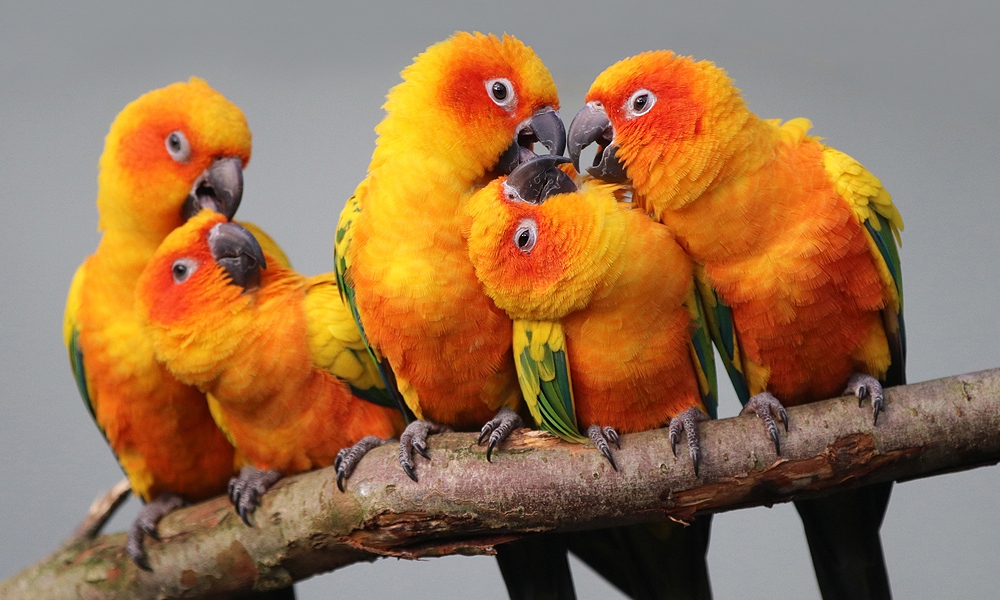 Both the adult male and the female have a similar rainbow appearance. The Sun Parakeet are Northeastern South American native bright colored parrot and are easily found in that area.

As a pet, sun conure is easy to be trained and is extremely cuddly. But be careful if provoked Sun Parakeet can bite the owner.

Rose-breasted parrot cockatoo is also widely known as Galah. It is native to mainland Australia and can be found in every part of the land. It is famous for its beautiful rose-colored parrot body and grey wings.

The head is lighter than the rest of the body; meanwhile, the claws are grey. Both the male and female Galah have the same colored feathers and are hard to distinguish. 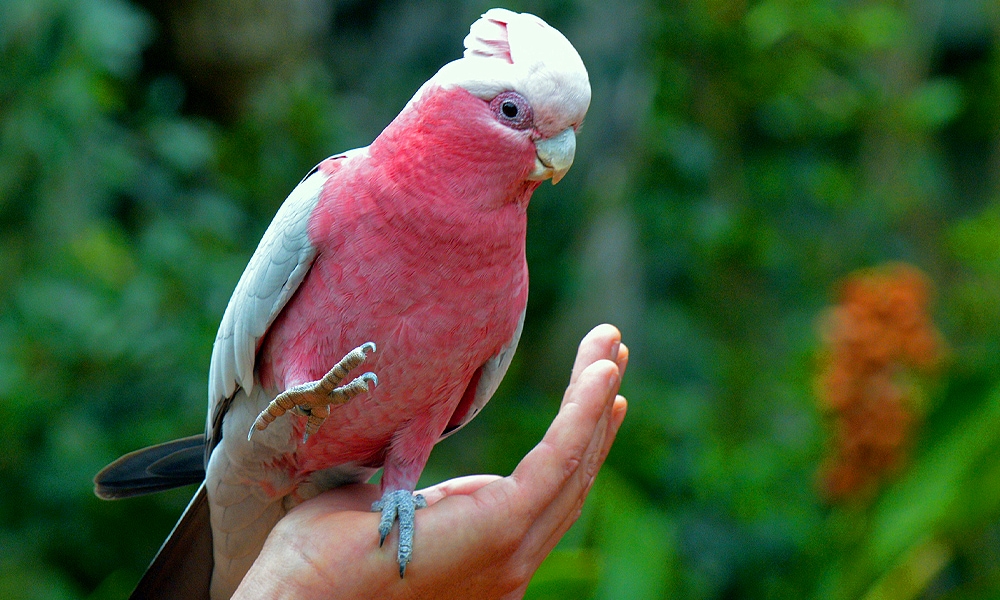 Pet owners and dealers differentiate between both genders by their eyes. Male Galah has a darker brown iris than its female companion.

They do not like to cuddle as much as the umbrella cockatoo parrot. Nonetheless, the Rose-breasted cockatoo parrot has a peace-loving and friendly nature. And this makes them a good option for pet birds.

Just like the Sun Parakeet parrot, the Scarlet Macaw parrot is also a rainbow bird. The top thing that makes it different and unique from other rainbow birds is its body weight and size.

The scarlet macaw has almost 1 meter tall with an equally longer wingspan. As the name suggests, she is mostly red with yellow, blue, and green feathers on both wings. 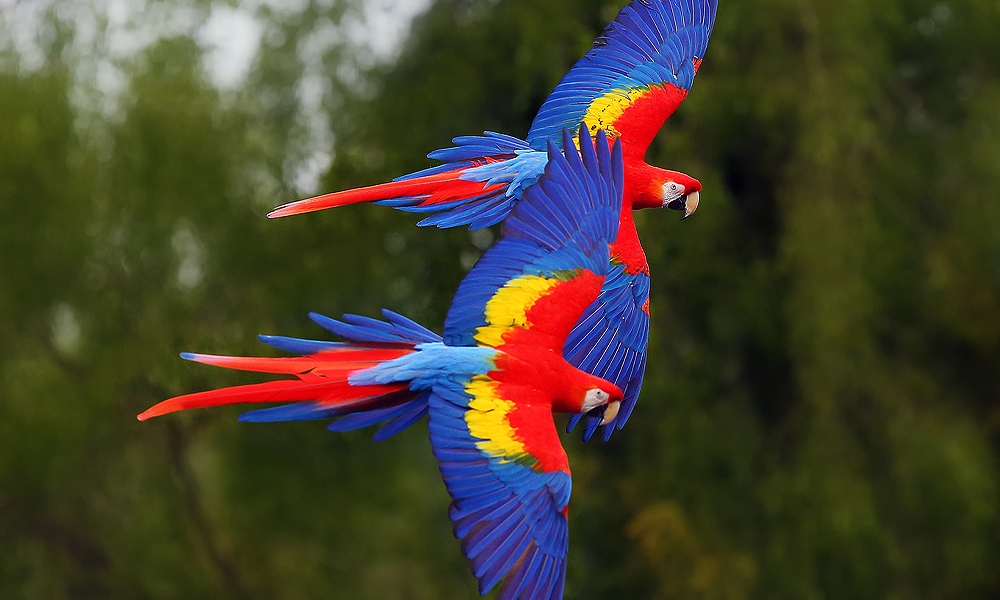 Another thing that makes this parrot look different is the white-blushed face and black and white beak. The Scarlet Macaw parrot is native to central and South America and can be seen in the evergreen tropical forest.

As a pet, the scarlet macaw parrot is an intelligent and friendly bird. The parrot is confident but high maintenance and requires more time to be trained. But when trained well, it can develop a vocabulary of 10 words.

The dusky lorry is also named as Dusky Orange Lory, White-rumped lorry, or simply duskies. Most of its body I darker brown, but it has dusky orange underparts and neck.

The wings can have dusky orange or yellow feathers and the beak is usually orange. The male and female have similar appearances and the same building. 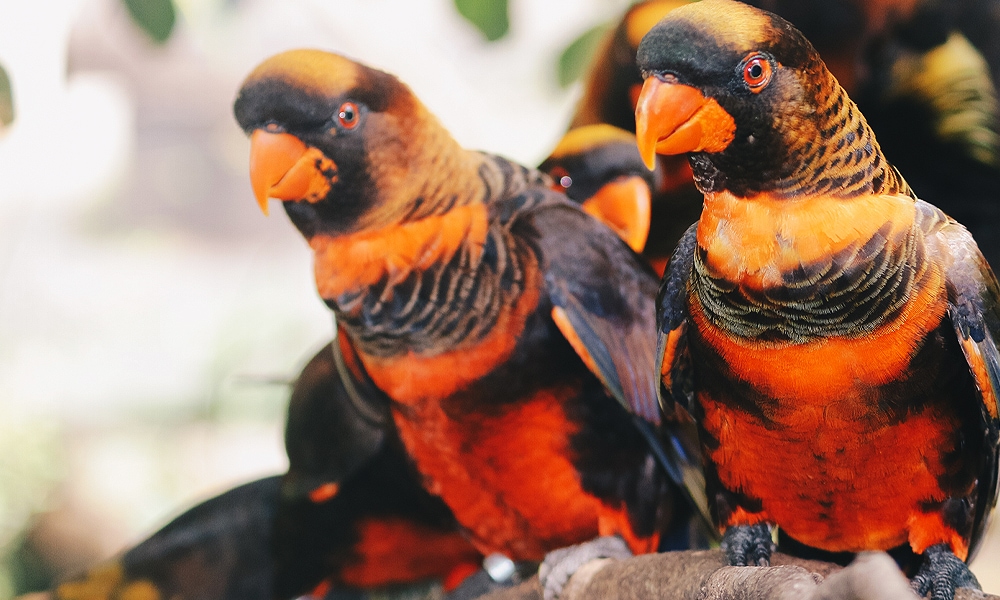 This specie is found in the offshore islands of Batanta and New Guinea or the areas around those locations. Duskies are confident and high-energy birds.

It not only gives the owner attention but also demands the same attention and reward in return. This makes the white-rumped a high-maintenance bird that is only suited for well-financed pet owners.

Rosella is an umbrella term and has many different parrot types in the family. The most common one is a multicolored bird; it is a parrot but has the shape of a sparrow.

The main distinctive feature of Rosella birds is their tail; it is broad and flat. This specie is part of the “flat-tailed” parrot family and can be easily found in Australia. 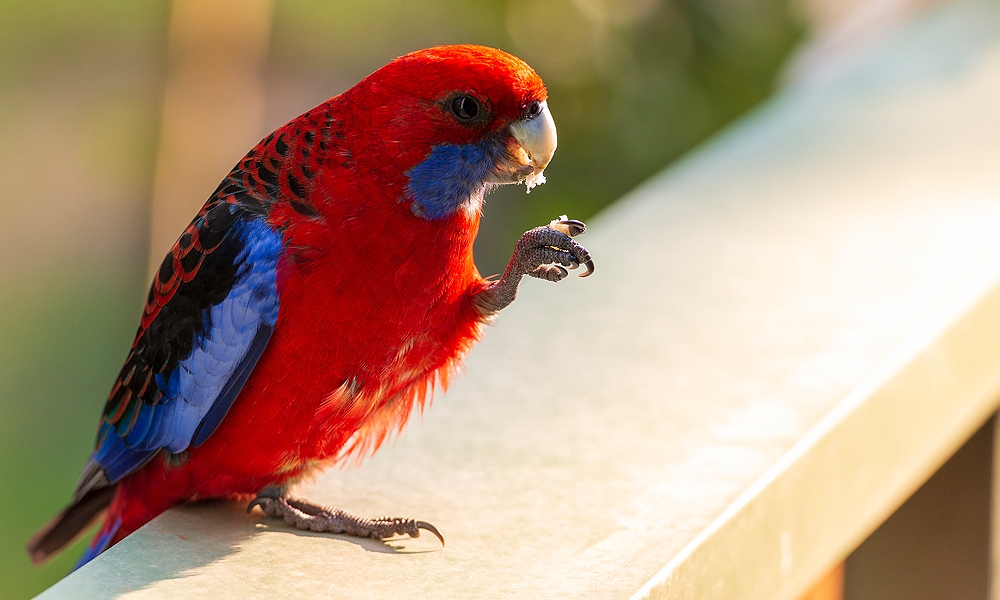 Both males and females of every type look similar. And the main color pallet of rosella is usually bright and consists of red, yellow, green, and blue parrot.

Rosella parrot birds are considered good pets because of their colorful appearance and calm nature. These colorful parrots are not high maintenance, but they do require to be hand-trained.

Rainbow Lorikeet is one of the most colorful parrots. Their head and underparts are blue, neck orange, beak red, and tail green.

In short, the parrot’s whole body is covered with colorful feathers. Both the male and female bodies look identical with the same color pattern. 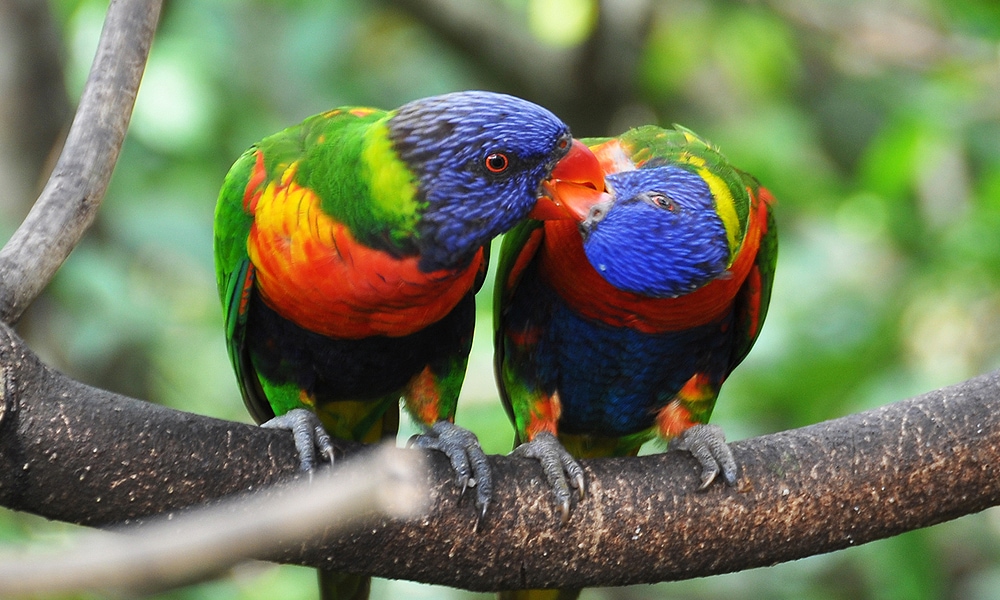 Rainbow Lorikeet is native to Australia and is common along Queensland to South Australia. They can be found in the coastal bushes, woodland areas, and rainforests of Australia.

Rainbow Lorikeet is a good pet if you want a playful companion. They are not high maintenance, but they do demand more time. This makes them good pets for people who have extra leisure hours.

This green-winged macaw parrot is mostly red but is considered a multi-colored bird. People also consider this red parrot bird one of the largest flying birds with an almost 1 m long body.

Their wingspan parrot is also the same as their length. The green-winged macaw lives in the woodlands, and forests of northern and central South America. 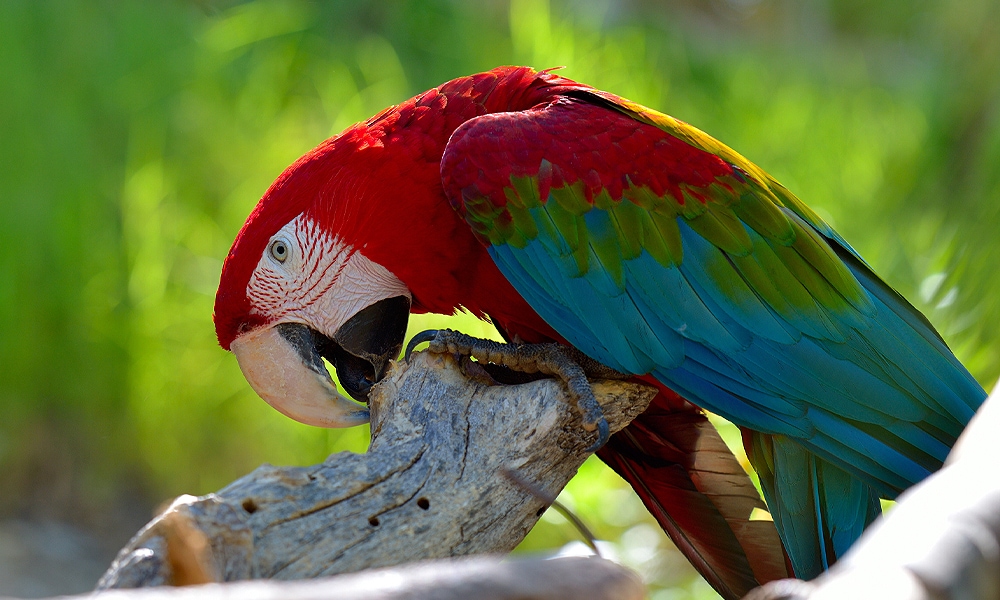 The big white beak of the green-winged macaw looks dangerous. But just like Hyacinth Macaw, this bird is also gentle with its owner.

The bird does not bite. But before adopting macaw, you should know they are high maintenance. They also love social interaction, so the owner needs to invest more time with them. 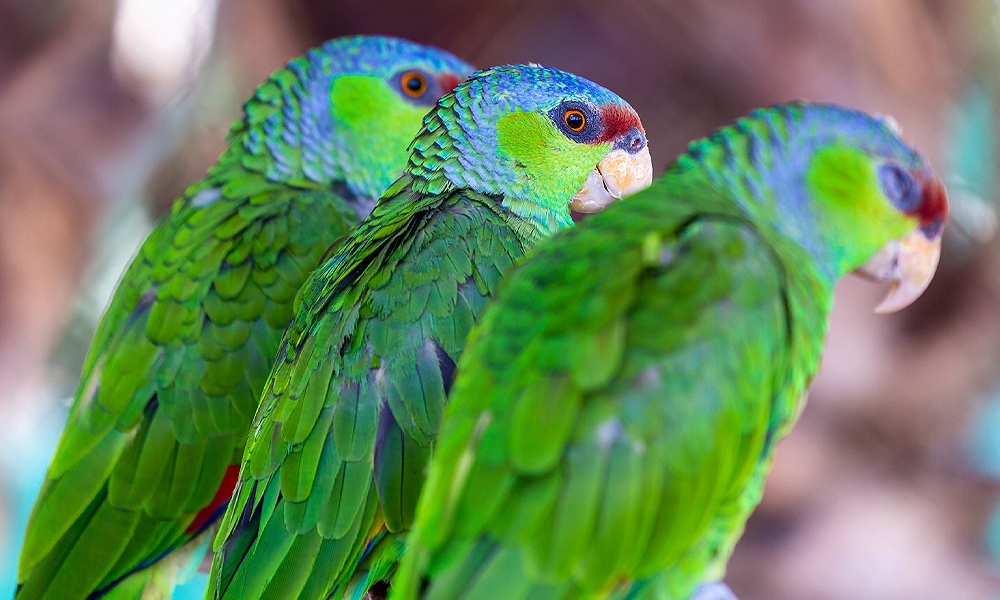 The lilac crowned amazon is also known as “Finschi’s amazon.” At first glance, this green parrot bird looks like a common parrot. But its lilac crown and maroon forehead make it unique from other species of parrots.

This ground parrot also has a splash of lilac on the neck as well. Lilac Crowned Amazon is native to the Pacific slopes of Mexico.

These birds are neither huge like macaws nor neither too small. As pets, Lilac Crowned Amazons can be great pets because of their longer lifespan.

A healthy finschi’s Amazon can live up to 40 to 60 years. This parrot bird is energetic and friendly and low maintenance. They are not great talkers, but they do make noises. 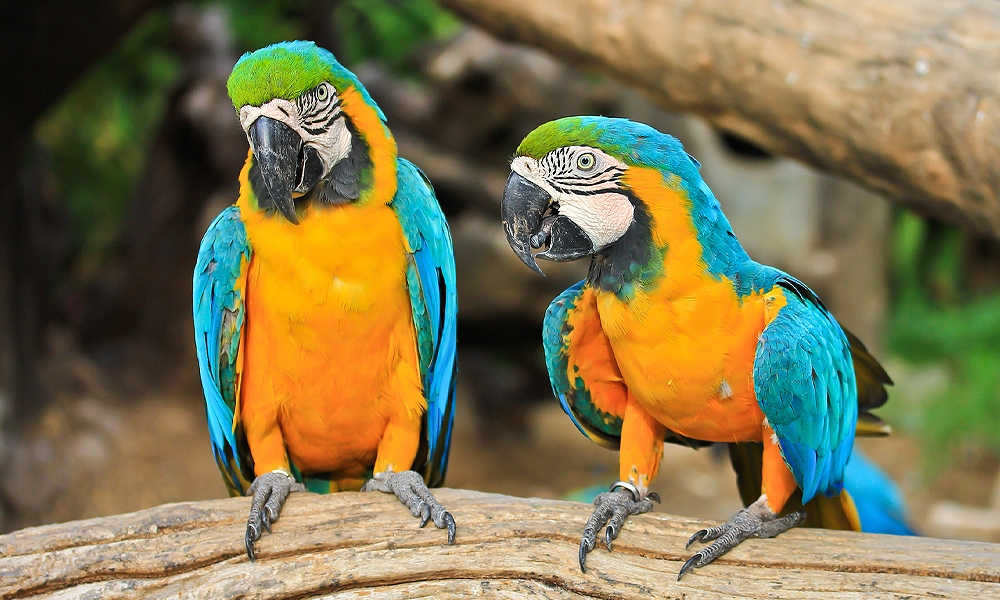 Blue and gold or blue and yellow macaw are famous types of parrot present in South America.

This bird is mostly blue on the plumage and has yellow (sometimes orange) underparts. The face is almost white but darker near the neck and the crown area has a green gradient.

This macaw is also bigger and bulkier than other macaw species. Blue and gold macaws are peace-loving and social parrots. They are intelligent and are easy to easily.

You can also teach this bird to talk with the right amount of practice and patience. Just like most the macaws, the blue and gold macaw is also high maintenance. 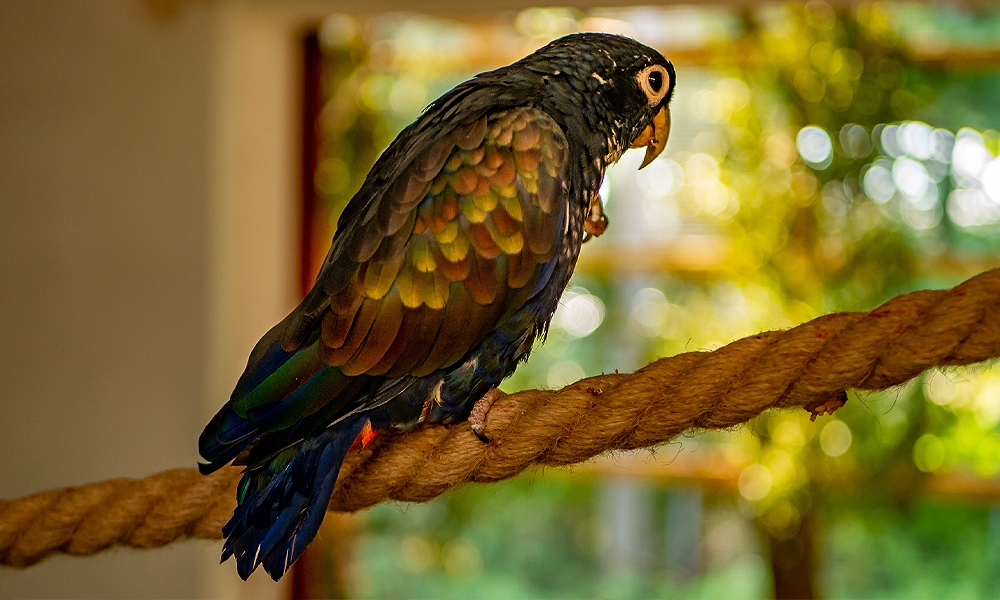 Unlike its name, these bronze-winged birds are purple parrots. They have a hint of pink feathers on their wings and on their neck.

The beak is yellow and pink feathers surround the eyes as well. Most of these purple parrots do have a splash of red on their body near the claws.

But despite that, these parrots are good pets. This bird is on the smaller side, so it loves cuddling. Overall, bronze wings are not high maintenance; all they want is affection because of their nature.

Now that you know about these 12 colorful types of parrots and basic info choose the one that suits your lifestyle. Macaws usually live longer, so if you want a lifelong companion that can be the one. Other than that, all of the most colorful birds in this list are good options for pets.

Top 10 Most Beautiful Parrots In The World